Today we are celebrating the launch of 4 films produced on a workshop Chocolate Films have been delivering in partnership with IWM, Goethe Institute and Mosede Fort, Denmark. Make Film, Make History is an EU funded partnership project working with young adults (aged 18-24) from all over the UK, Germany and Denmark. The participants have been working together to develop, produce and share films inspired by a common history, experiences of being young in Europe today and the future of Europe. 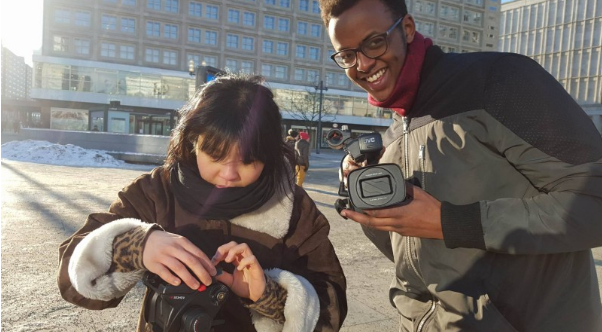 After 14 months of hard work the participants got to shoot and edit their films at a three day residential hosted at IWM London in April 2016. The new films were inspired by 100th anniversary of the Battle of the Somme and the British film depicting the battle. The residency was a huge success, and each project turned out to be brilliantly different in style and tone. Here are the films:

This film was inspired by original testimonies from the First World War, and follows the story a young man who is conflicted about joining the army today. The film brings his great grandfather’s diary entries to life through evocative flashbacks, as we feel the horror of what life must have been like in the trenches.

A mockumentary that use humour and satire to show that some problems are bigger than having a low battery on your laptop. A rapping-reporter helps young Europeans with their #FirstWorldProblems, only to discover that some problems can’t be solved alone.

This film is based on testimonies from the homefront of three countries during the First World War: Great Britain, Denmark and Germany. It combines poetic animation with exclusive archive footage and haunting music to tell the story of emotions on the home front during the war.

The Future of the EU

We took to the streets – as well as offices and museums – to find out what people really think about the future of the EU. From members of the public to members of the council, this film gives a fresh and honest view on that state of the European Union today, and where we are heading.

The Future of the EU:

Londoner #8 Frank joined us at Chocolate Films for work experience!

Londoner #8 Frank joined us at Chocolate Films for work experience!